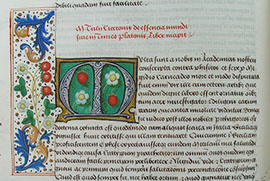 The Classics section essentially includes professors studying the languages and literatures of pre-classical and classical antiquity and of Greek and Latin Middle Ages, with a special focus on text-critical analysis of works, linguistic history, text tradition and edition. The scientific unity and consistency of the section is ensured by a vision of continuity in European culture, started by Humanism and renewed by philological and literary research between the 19th and the 20th centuries. This vision originated in the classical and Biblical-Christian period and, through its Medieval re-interpretation, reached the modern world. The chronotopic areas of research are: the Minoan-Mycenaean civilisation, classical Greek and Latin languages and literatures, ancient Christian literature in both classical Greek and Latin; Byzantine literature; Middle Latin literature; humanistic Latin and Greek literature.